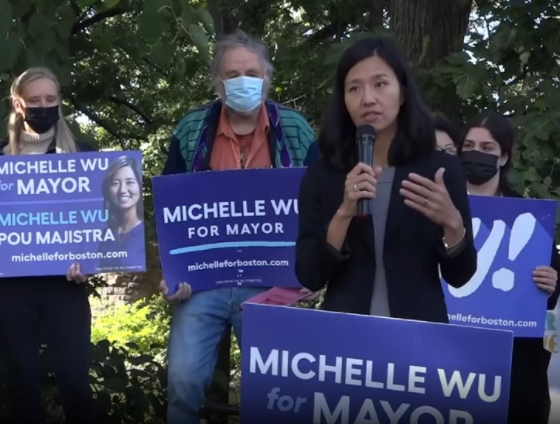 After President Biden announced Boston’s previous mayor Marty Walsh would be the new Secretary of Labor, Bostonians anticipated an election determining the replacement for the mayor of seven years as interim Mayor Kim Janey stepped in to replace him. This March, Janey began her term as the first woman of color to serve as acting mayor of the city, but this election stood to determine the first elected woman of color to fill this position. After 200 years of only white, male mayors in Boston, this election stood to make history as both candidates, Michelle Wu and Annissa Essaibi George, are women of color. Winning in a landslide in the historic November 2 election, Michelle Wu stands to take office November 16, 2021.

The Democratic candidate took the city with a decisive 64.2% of the vote for her positions on issues such as housing affordability, education equity and transportation. A post-election Boston Globe poll shows that 20% of voters identified housing as their top issue in Boston’s mayoral race. Similarly, Wu cites housing issues as her top priority because of the trickle-down effect housing has on racial and health issues. Although her opponent, Annissa Essaibi George, made similar claims about fighting against homelessness and increasing homeownership in the city, Bostonians appreciated Wu’s plan to allocate 40% of Boston’s federal funding from the American Rescue Plan to prevent displacement, expand access to homeownership, support community land trusts, fund capital repairs to Boston’s public housing and build energy-efficient housing.

As Boston Public Schools have been scrutinized in recent years for inequitable resources available across different neighborhoods, the equity of public education in Boston has become a major issue for this mayoral election. As a mother of students within the Boston Public School system, Wu appealed to voters for her experience with the issue as well as her multivariable approach to achieving equity. During her term, Wu plans to safely finish reopening schools, guarantee early education for all, improve mental health resources for students, implement active anti-racist policies, expand vocational education opportunities and ensure safe and reliable transportation for students. These initiatives will build Wu’s work within the city council in recent years to provide healthy school meals, improve vocational education and safely educate students throughout the COVID-19 pandemic.

One of Wu’s most controversial plans is to make public transportation free for all. For years the MBTA has incurred debt despite rising ticket prices. Wu feels that bold moves like making the MBTA free are imperative in creating a greener city because they will increase ridership and decrease car traffic in the city. This transportation measure is one of many policies Wu wishes to attain in order to improve sustainability and reduce the racial wealth gap in Boston.

With focuses on sustainability, affordability and racial equity, Wu attracted supporters with her main goal: creating “a Boston for everyone.” Wu’s election broke numerous precedents in Boston’s government, and as the mayor-elect looks to the future, she feels “ready to meet this moment” and improve government to meet the shifting needs of Boston.