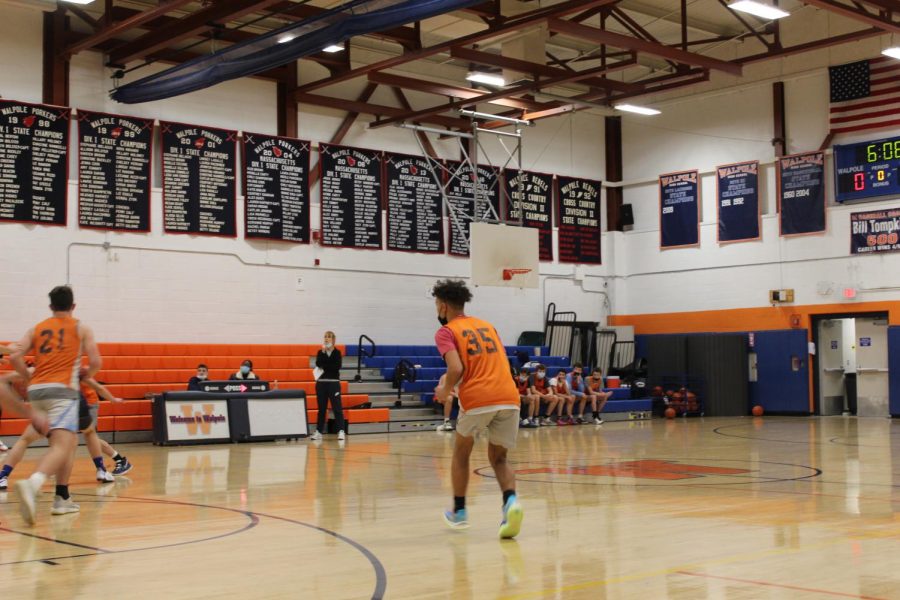 Galster coaches in a scrimmage against Bedford on December 7.

Of many applicants, Coach Galster won the position with help from her experience.

“We had a process with many applicants, but we feel we have the right person for the job,”Athletic Director Ron Dowd said.

Galster has loved basketball since a young age and knew she always wanted to be a coach. Growing up, she always took opportunities to practice on her own or join any teams she could and this passion later translated into her passion for coaching.

“I actually started coaching soccer in sixth grade and then picked up coaching local basketball camps when I was in high school. In college, I worked a bunch of different sleepover basketball camps at various colleges. It quickly became obvious to me that coaching allowed me to combine my love for basketball with my passion of being an educator,” Galster said.

Walpole’s coaching position was the first head coach position she applied for after leaving Holliston largely due to her feeling that Walpole’s style of play aligned with her own. She wants to have a seamless transition as the new coach, yet is prepared to bring her own opinions and experience to the program. Galster hopes to build off of the team’s four and six record last year and the hard work they put in over the offseason. She is confident in the team’s abilities, but more importantly, she hopes to build a strong community surrounding the sport.

“[I hope to see] the stands filled with WHS students supporting their peers. Also, in the stands, a large group of youth fans watching their role models leave it all on the court as they dream of their future chance to be on the varsity court,” Galster said

Galster has a precidious career thus far and Walpole is ready to take her in as the new face of the boy basketball program. The boys team excitedly awaits the start of the season with their new head coach.

“I see Coach Galster having a very successful season this year coaching us, she has a great group of guys with a lot of talent. I believe she can be the coach of the future for Walpole Basketball,” captain Ryan King said.

The Walpole sports community has adopted Galster into their own community and have high hopes of the future corresponding with her own hopes.

“I think the program is in good hands with Coach Galster.  I would expect them to compete nightly and improve throughout the season. Anytime you have a talented group that is willing to work hard, you will have some success,” girls varsity coach David Wall said.

Galster is excited to start the season within a new community with the first game of the regular season on Dec. 14.

“I walk away each time so happy that I have the opportunity to become part of this community,” said Galster.