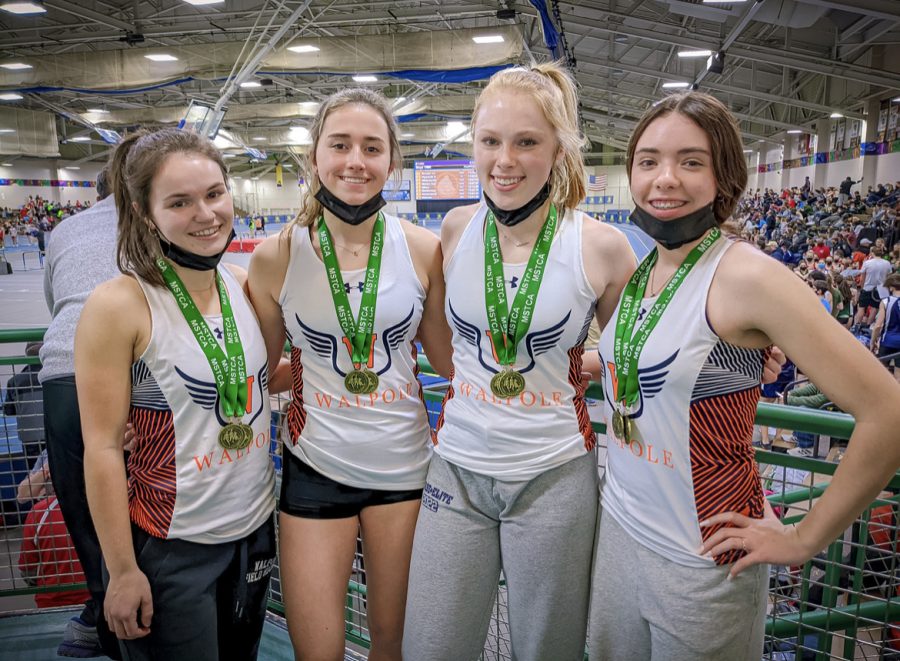 For the last two years, there has been no national meet for high school track and field because of the COVID-19 pandemic. Sponsored by New Balance, nationals is the last track meet of every season, where the best high school athletes from all over the United States can compete. In the indoor season, New Balance Nationals is held at The Armory in Manhattan, New York, while in the outdoor season it is held at North Carolina A&T State University in Greensboro, North Carolina. The New Balance Nationals has rigorous qualifying standards that the majority of athletes can not attain, however, during this indoor season, Walpole High School already has six runners qualified.

Senior Sophie St. George was the first to qualify from Walpole on Dec. 23, at Bay State Conference Meet #2. She ran the mile with a personal record of 5:14.04, taking first place among the entire conference. The qualifying time for the women’s mile in the Rising Stars Events at nationals is a 5:15, which she just made. St. George has had a successful season thus far and looks forward to finishing her last few meets in post-season with divisionals and all-states coming up.

The next athlete who qualified from Walpole was another senior, Nolen Beauregard, who qualified in the men’s 60m hurdle race. On Dec. 27, in the 55m hurdles, he ran a personal record of 7.75 in the first heat at the Boston Holiday Classic and then a 7.74 finals, placing third. Since there is no 55m hurdles race at nationals although it is the only hurdles distance run here in Massachusetts, athletes are allowed to use their 55m hurdles time to qualify. In the Rising Stars Events, the qualifying time for the 55m hurdles is a 7.79, which he made in just 0.05 of a second.

The last athletes from Walpole to qualify was the 4x200m relay team, consisting of seniors Cara King, Maggie Mahoney, Lynsey Tashjian and sophomore Meri Feener. On Jan. 21, at the Division 3 Relay Meet, the relay team broke two school records with two first place finishes, scoring a total of 20 points for Walpole. In the 4×50 yard shuttle dash relay, they ran a time of 25.43 and in the 4x200m relay, they ran a time of 1:50.18. The Rising Stars Events qualifying time is 1:51, which they got less than a second under. The relay team consisting of majority seniors brings experience and smooth handoffs, since they have been doing it for four years.

“Cara, Lynsey and I have been running together since freshman year, so even though we weren’t all in this relay together at that point, I think going to nationals with the people I started track with is the perfect way to end,” Mahoney said. “Now every time we run this relay I think we take it a little more seriously knowing that if we don’t run it well it could be our last time.”

New Balance Indoor Nationals will take place from Mar. 11-13 at The Armory in New York. Qualifying for nationals is a huge accomplishment and each athlete should be very proud of themselves for achieving these goals and going to compete against the fastest runners in the United States.

“I am excited about everything with nationals,” King said. “Running at a completely new place in New York City, against some of the best teams in the nation, it’s something to be very proud of.”