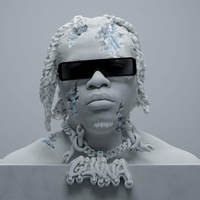 Georgia-born rap star Gunna’s 10th studio album that was released on Jan. 7th is not without its charms. In the genre of rap music today, with seemingly countless albums dropping every week, it is a struggle to gain sales and streams in the headphones of rap fans. Gunna gained popularity in late 2017 when he was featured on multiple tracks from larger artists such as Drake, Pop Smoke and Travis Scott.  His first album release, “Drip Season,” in 2016 was his first entry into the rap world. 2018 saw the release of his first commercial success album, “Drip Harder,” in which his first hit track, “Drip Too Hard,” featuring rap star Lil Baby amassed over 890 million plays on Spotify, and put him on the map for millions.

Many users of TikTok used one of DS4Ever’ tracks, “Pushin P,” resulting in the song receiving over 28 million streams on Spotify in the first two weeks of its release. The fast-paced beat with plenty of drill-inspired bass and classic back-tracking made for an instant hit among the younger audiences, and quickly became another TikTok trend in which users use the phrase “pushin’ P” as another way to say thumbs up. Featuring icon Young Thug on this track, “Pushin P” is easily the best track on the newest album.

Gunna brought an arsenal of artists such as Drake, G Herbo, Kodak Black, Future and Roddy Rich ensuring that the album’s tracks do not become too stagnant. However, any of the tracks without features that use just Gunna’s voice have very repetitive and unmemorable beats with no lyrics that strike listeners. One track in particular, “die alone,” featuring Yung Bleu, is downright dreary. With a slower beat and a heavy piano tone, the vocals are very whiny sounding and slow, drawling lyrics that are uninspiring and hard to listen to. As far as a hype-up track, it falls short and has no place amongst the big hitters of this type of downtrodden, heartfelt struggle story rap song, in which the good ones have varied verses with passionate vocals and strong beats. The track, unfortunately, lacks both, and it almost sounds like a child whining into the microphone over a boring piano track with no variation or excitement.

Overall, this album feels like just another soulless money grab and a rushed project. This album might be worth a listen, however did not feature many memorable tracks. As far as Gunna’s projects go, this album is not one of his best.