What Our Birthdays Say About Us 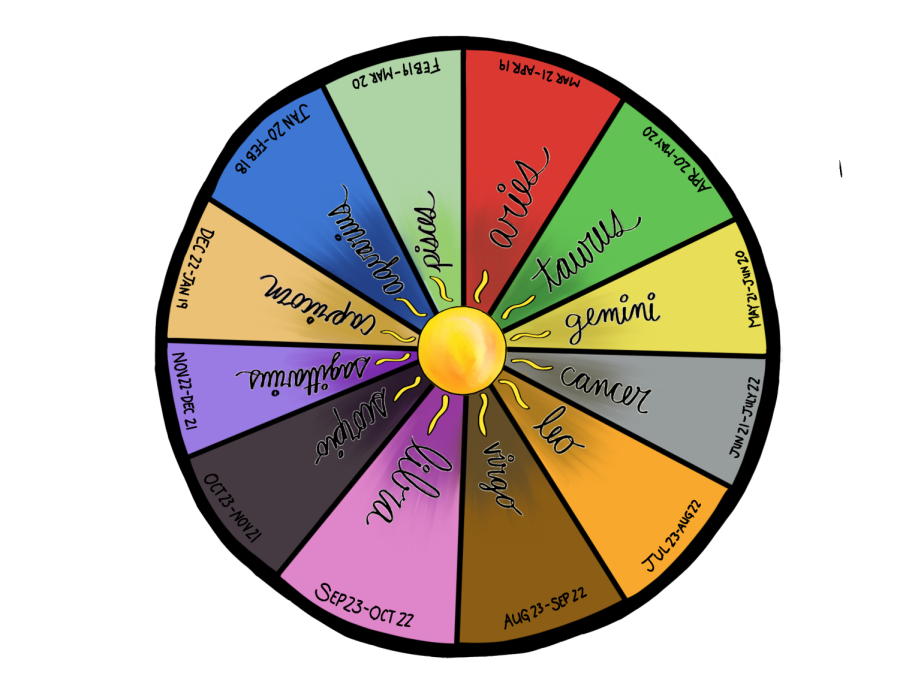 First invented by the Babylonians in 450 BCE, astrological signs have prevailed throughout history and are still present in modern society today. The 12 sun signs are determined by the month in which someone is born, and are often believed to determine one’s character. Astrology is made up of more than just the popular sun signs however, and there are other categories that are determined by exact specifications of the stars during the time and place someone was born. The most popular “big three” signs are sun, moon and rising. Moon signs are meant to represent one’s inner emotions, rising is the way we are perceived to others and sun is the culmination of everything. There are many other signs including Venus, Mars, Mercury and other planets. The signs are determined by where the location of the sun, moon or specific planet was on the date of your birth. Sun signs are typically the most popular and well known, due to the fact that they are the broadest and are determining factors in your character as a whole.

Personally, I feel like my attributes do directly line up with my “big three” signs, which does contribute to my own confidence in astrology. I am a Cancer sun, Aries moon, and Scorpio rising. Cancers are meant to be sensitive, devoted, and protective. My Cancer sun is supposed to resemble my entire character as a whole, whereas my Aries moon and Scorpio Rising get more specific. Moon signs resemble a person’s inner emotions, the subconscious that is not projected outwards. Someone with an Aries moon like myself tends to be hot-tempered, adventurous, and emotionally independent. Rising signs, also known as ascending, are somewhat of the opposite of a moon sign. These signs tend to signify how someone projects themselves, instead of that in which they keep to themselves. While moon signs are ruled by what constellation the moon was in when someone was born, rising signs are determined by which constellation was on the eastern horizon during someone’s exact time of birth. Scorpio rising are sweet once you get to know them, but show off a tougher exterior.

The qualities of astrological signs are often determined by the planet that rules over the sign, and as well classified similarly to the Roman gods and goddesses that those planets were named for. For example, an Aries is ruled over by the planet Mars, the Roman God of War. Consequently, Aries are often described as hot-tempered and bold, as those are corresponding traits between the two. Interestingly, in modern astrology, Scorpio’s ruling planet is Pluto, however before Pluto’s existence was known, Scorpio’s ruling planet was said to be Mars. Many traits of Aries and Scorpio are quite similar then in turn.

While we may not know everything about astrology, and some of the information out there may be contradictory, the choice about whether or not to believe in it is your own. Personally, I believe my astrological jurisdictions fit my personality, so I may be more inclined to believe in it. Astrology is not “one size fits all,’ but instead a mixture of all of the characteristics that may or may not fit someone’s personality.

At the risk of being perfectly blunt, there is no proof that astrology is 100% true. Some find certain aspects to be accurate, whereas others feel the entire concept is completely preposterous; nonetheless, astrology is wildly popular among adolescents today. A primary contribution to astrology’s attraction among teenagers is social media, and in particular, Tik Tok. There are often trends on the app where creators list different zodiac signs under different aesthetics, personalities, fictional characters and countless other categories. When users interact with these videos, more zodiac-related Tik Toks are added to their feed, perpetuating astrology’s popularity. By the same token, BuzzFeed contributes heavily to astrology’s popularity because of the quizzes offered regarding different signs. In recent years, however, another website has taken on a prominent role in astrological readings: Co-Star. Co-Star claims to be a historically accurate account of astrological information, and it offers a variety of different readings and updates on peoples’ signs. Besides descriptions of different signs, Co-Star provides charts and graphics based on NASA data to give users an insightful perspective toward their astrological readings.

There is an increasing emphasis on wellness in today’s generation, and astrology can serve as a template to better ourselves on a more meaningful level. For instance, Cosmopolitan Magazine describes Scorpios as the following: passionate, persistent and secretive. Attributing both positive and negative qualities to each sign gives them the opportunity to better themselves and learn more about their personalities. Similarly, people turn to astrology in times of stress. Adolescents deal with many social stressors, but astrology offers comfort for the future. As a result, millennials and Gen Z-ers rely on astrology for predictions about their daily lives and moods.

Despite its suspicion, astrology provides a sense of control and allows people to look deeper into their lives. So, astrology can give meaning, direction and hope to those who need it.