Unique Prom Photo Locations In and Around Walpole 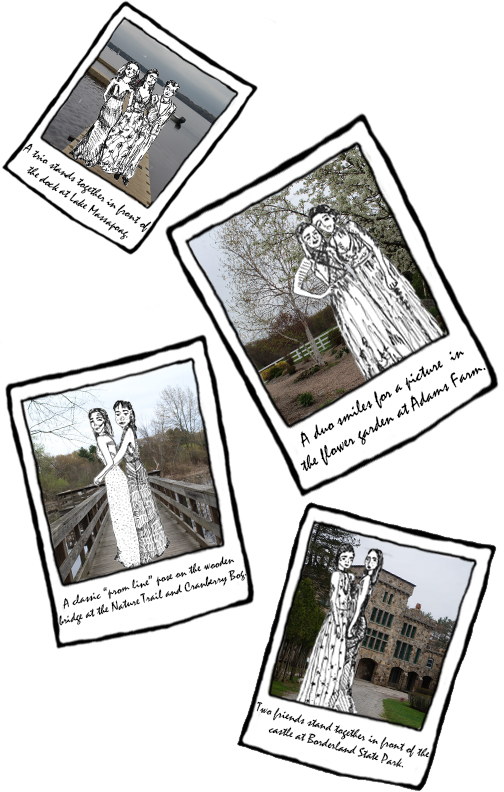 Every year, just hours before prom, students flock to Francis William Bird Park in large groups to find the perfect backdrops for their photos. Often times, students underestimate how many of their peers have the same idea as them, and they end up waiting in mobs just to get pictures in the same spot by the pond or on the same bridge as everyone else. Not only does waiting around in popular spots such as Bird Park waste time, but it also results in everyone having prom photos that look exactly the same. To avoid large crowds, some students gather groups of friends in their front yards, usually with backdrops much less aesthetically pleasing. Instead of getting caught up in the crowds or stuck in a friend’s front yard, head to one of these beautiful nearby locations to snap unique prom photos to document a night to never forget.

Lake Massapoag, more commonly known as “Sharon Lake,” is becoming one of the most popular sunset photo locations for Walpole students. Images of the long dock overlooking the glassy lake water adorn students’ VSCO accounts year-round, but prom photos in such a beautiful spot would be even more special. Along with the dock, the lakefront property hosts a small sandy beach and large patches of lush grass, allowing for a variety of picture-perfect backgrounds. The dock is easily accessible and definitely worth it for serene waterfront pictures just 13 minutes from Gillette Stadium.

Typically overshadowed by Bird Park, Walpole students rarely go to the equally as beautiful Adams Farm for prom photos. Although it is slightly further from Gillette Stadium—17 minutes away—Adams Farm will be significantly less crowded by other groups of students, which allows for more privacy and more time for photos. For those interested in the beautiful backgrounds of Bird Park, Adams Farm serves as a similar, but less crowded location. Adams Farm has a big, beautiful red barn that would compliment most dress colors nicely. Additionally, the farm is home to wide open fields adorned with wildflowers and a well-kept flower and herb garden that always attracts butterflies. With luck, one might even get a butterfly to land on their corsage, making for arguably the most picture-perfect prom photo possible.

Few people visit, or even know about, the Ocean Spray cranberry bog nature trail behind Bass Pro Shops at Patriot Place, but it would make for the perfect secluded area for prom pictures. Not only is the bog a prime location because of its close proximity to the event venue, but it is a hidden gem for photo shoots. The crimson color of the berries around the wooden bridge trail would compliment everyone’s prom attire. The bog area has a beautiful view of the calm, glassy water behind the strip mall and its location is perfect for prom photos, as it is just down the street from Walpole prom’s location, Gillette Stadium.

The expansive 1,800 acre stretch of land that is Borderland State Park has a multitude of photo opportunities that would make for elegant yet unique prom photos. Among the many different types of gardens that the state park is home to, there is a beautiful castle-like mansion that is perfect to pose in front of. The Ames Mansion, built in 1910, is at the very center of the park, and its stone walls would compliment corsage flowers and glittery dresses nicely. Additionally, the many fountains, archways, fields and paths lined with flowers would be equally as beautiful. On a pre-prom trip to Borderland State Park, just 19 minutes away from Gillette, students will be awed by the amount of picture-perfect spots.

The Searchlight • Copyright 2023 • FLEX WordPress Theme by SNO • Log in